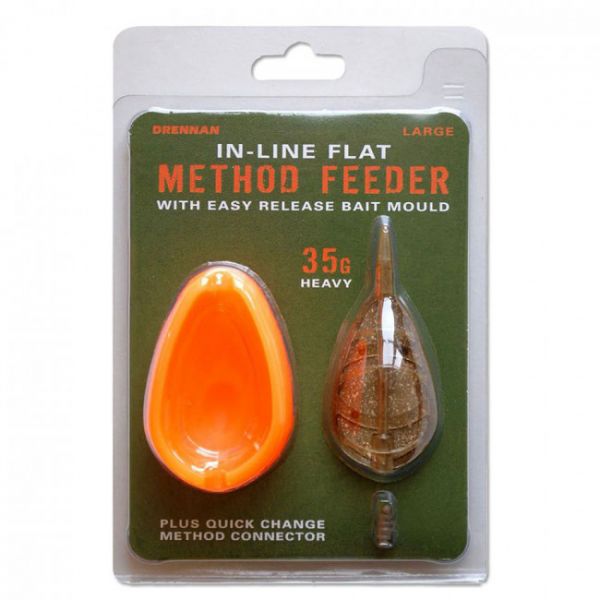 As low as £5.38
Availability: In stock
SKU
1PA202
Add to Wish List Add to Compare
Facebook Twitter LinkedIn Google + Email
Details
Fish safe and carp fishery approved, this new In-Line Flat Method Feeder with Easy Release Mould could just be the baiting solution that carp anglers everywhere have been asking for. This method feeder has been designed to distribute the weight of the bait load so that it complements the lead in the base, allowing the feeder to fly through the air in an aerodynamic bomb shape most often seen with spod rockets rather than method feeders. This allows you to achieve fantastic casting distances and can significantly improve the accuracy of your cast, particularly if weather conditions, such as strong winds, are against you.

The body of the feeder itself features two large bait holding ribs, which are spread far apart and curved away from each other, providing you with ample space to place your hookbait. The easy release mould makes it incredibly simple to fill this feeder. Simply place your hookbait in the centre of the mould and pack your premier carp bait in around it. Drennan recommend filling the mould and then using the feeder itself to press the mix together, as their mould is slightly larger than other manufacturers and overfilling will not allow the feeder to perform to the best of its abilities.

The mould should come free from the bait without any persuasion, but if you are using a particularly sticky mix you would be wise to dampen the mould before filling. The slime line connector allows for the quick change of hook links and feeders, as it offers ideal loop to loop attachment, and it has a breaking strain of a whopping 36lb!